Strapped for cash but dying to dine in style? Emanuelle Lee checks out three fine restaurants where the bargains are located at lunch. 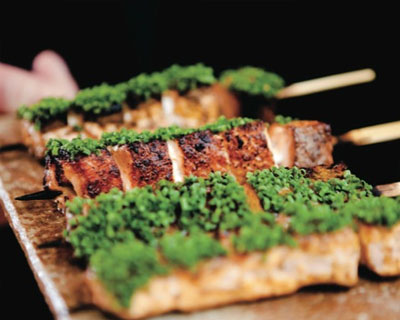 Upon entering Coya, you’re hit with a whoosh of grandeur. Certainly for a lunch time, at least, and you know you’re in for a treat. It’s not what you’d imagine your average Peruvian restaurant to look like but it’s clear they’ve kept some authenticity in their décor…it’s just a little bit more polished. When you’re led down the staircase to your table, the array of colors and antique pieces around the room bring you closer to the Peru you were hoping for, as do the ruby red ceramic-like plates draped in ceviche.

Coya has been a hot topic this year. Perhaps it’s the South American of the major league in restaurants. It’s up there in reservation difficulty (and, inevitably, price), so I don’t blame diners for taking advantage of their set lunch menu.

Understandably, diners might not know what they’re doing menu-wise at first, but the staff are happy to help and give suggestions that they’ve clearly tried and died for too. If it’s a light lunch you’re after you can enjoy two courses for £19.50, including the Salmon Nikkei: a melt-in-your-mouth, raw salmon dish that’s marinated in celery juice, ginger, daikon and wasabi tobiko, along with a refreshing quinoa salad. If you’re up for a third course for £26.50, the Confit de Pato, an awesomely juicy duck leg, is right up anyone’s alley. If that doesn’t do it for you, for a fourth course it’s £31 and the sorbets are undeniably great.

If you’re willing to add a few pounds to your bill for the sake of Coya’s version of a bread basket, I wouldn’t go back there without ordering the Crocantes: a selection of corn chips and prawn crackers with a crazy tomato salsa. 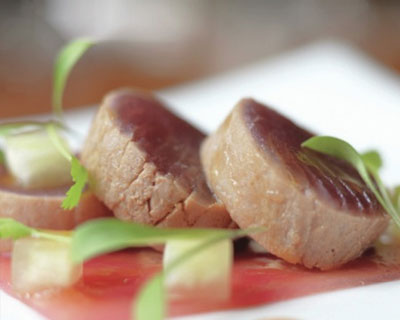 If you’re in Mayfair, there’s nothing more of a luxury then being fed by the king of gourmet cuisine, Gordon Ramsey, and when you’re getting it for a steal it’s even more satisfying.

Maze is located on the ever-green Grosvenor Square. Straight forward yet relaxed seating greets you, and your head might well turn when perfectly presented dishes speed past you in dapper servers’ arms.

On a usual visit, you can expect to receive a bill for at least £100 per stomach, so four courses for £30 at lunch is quite giving of Masterchef master, Sir Ramsey. Gordon allows you to choose four dishes from both savoury and sweet menus: a selection that is generous but admittedly slightly complicated, nevertheless tasty. An autumn-friendly spiced pumpkin velouté hits the spot. Perfectly accompanied by salt pollock and lemon yoghurt, it’s warming whilst revitalising. A simple crispy chicken thigh is perfectly cooked, teamed with a charred baby gem. The steamed bream in a ginger infused broth is as comforting as it gets, and the perfect case of Maze’s claim of French food with an Asian fusion.

In the ‘sweets’ department, the Frozen Banana with banoffee caramel is the cherry on top of the cake. It’s what you want in a dessert, sweet, sympathetic and not too heavy, despite the milk ice cream that’s served with it, which won’t be forgotten. 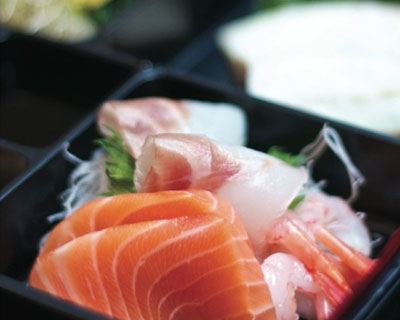 For a restaurant that has diners leaving in the next jeans size up, the trendy Sumosan has done the ideal job of providing you with a perfectly balanced (satisfying) lunch, not to mention it comes in an adorable Bento box that kind of makes you feel like a kid again (with much more grown up food, of course). Japanese fusion food, that is.

With a menu like this, it’s difficult to resist ordering too much on account of wanting everything, but with the set lunch menu, it’s really a “best of both worlds” solution. For £24.95, you sample from pretty much every piece of the menu spectrum. What might that consist of, you ask? Choose one dish from soups, salads, sushi, then a main – like a black cod with miso that dissolves in your mouth and results in you scratching the leftover sauce with your chopstick, or duck teppan). Then, there’s still a side dish to choose: the sweet potato tempura is advised, not forgetting rice, as if all of that wasn’t quenching your hunger yet, and last but definitely not least, dessert: fresh fruit, cleansing green tea ice cream or an erupting chocolate fondant, (probably where the fusion comes in, not something you see every day in Japan, however, most likely the one you’re going to choose).

Expect organised and helpful service from a Japanese server in a uniform that’s the most authentically Japanese aspect of the restaurant. Catch this deal between 12pm and 2.45pm daily and look out for any celebrities trying to make the most of the offer too.

Other articles by Emanuelle Lee